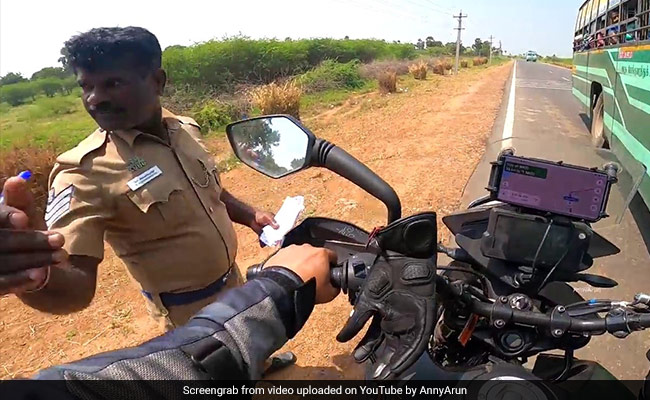 Latest: This Biker In Tamil Nadu Was Stopped By A Cop. Watch What Happened Next

A cop in Tamil Nadu stopped a biker and asked him for help.

A biker getting stopped by a policeman often means bad news. But here is a heartwarming story of a Tamil Nadu cop who stopped a biker to offer him an opportunity to be a Good Samaritan.

It all happened when the biker, who was on his way to Tenkasi in Tamil Nadu, was stopped by a policeman. In the video uploaded on a YouTube channel named AnnyArun, the police officer is seen asking the biker if he is from Karnataka. After the person says yes, the officer says that a state bus is going ahead on the same road and one of its passengers, an old woman, dropped her bottle of medicine. The cop asks him to chase the bus and deliver the medicine to the woman.

Then, the man fires up his bike and chases the bus. The video shows how the biker finds the bus and asks the driver to pull over. As the bus stops, the man takes out the bottle of medicine and hands it over to the woman who had dropped it.

Shared on YouTube two days, the video has been viewed by over 15,000 times. The post has also been shared on Reddit’s subreddit page r/HumansBeingBros.

Most people applauded the level of trust on display in the video. One of the users asked, “Where is this? Everyone seems so trusting.” Replying to this, another person said, “I know right. I would have rejected the cop’s request. I’d think ‘this is clearly a set up’. That’s how little trust I have for anyone else.”