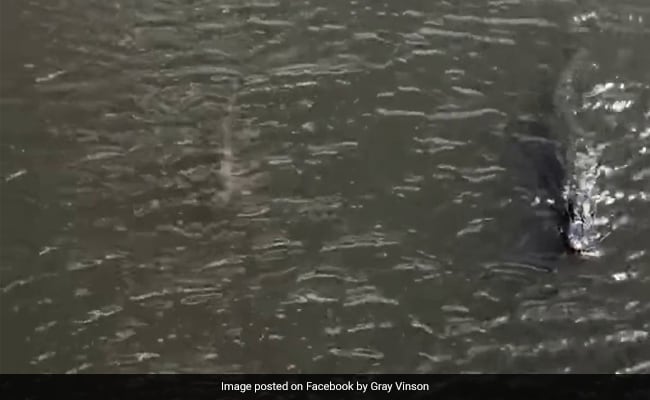 Latest: Shark And Alligator Swim Side By Side In Florida’s Indian River Lagoon

A shark and an alligator were filmed swimming together in Florida.

Alligators are a pretty common sight in the coastal state of Florida in the United States, but what is not so common is spotting an alligator and a shark swimming side-by-side in perfect sync. This rare sight was captured and shared on Facebook by a resident of Florida earlier this week. The video shows how a bull shark and an alligator were swimming together in the Indian River Lagoon on a sunny Sunday. At first, your eyes might only be able to spot a giant alligator moving swiftly in the waters. A closer look will help you spot the shark giving a tough competition to the gator.

“It’s not every day you see a bull shark and a gator swimming together in the Indian River Lagoon… I’m not so sure how the manatee made out,” the user wrote in the caption.

The post has received over 850 shares on the social media platform. Viewers in large numbers have taken to the comments section to share their thoughts on the rare scene.

A user said, “Wow! That’s crazy!”.  Another wrote, “We’ve seen both separately in the lagoon but that is pretty cool to see them side by side like that.”

In a 2017 research, scientists from Kansas University, US, found that American alligators prey on freshwater animals like sharks and stingrays. The study also found that there are instances where even sharks prey on alligators, making the two aquatic animals arch enemies. The study mentioned that alligators consume sharks that are smaller in size and that is why the fish may look like just any other to the average onlooker.