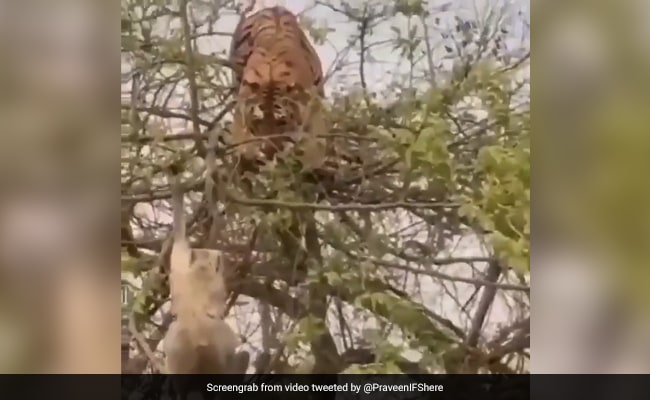 Latest: A Monkey’s Shrewdness vs A Tiger’s Confidence. Watch Who Won

A monkey vs a tiger: Guess who wins.

Have you ever seen a giant tiger clinging to a tree just to catch a monkey? Well, look no further, a recent video, doing the rounds on the internet, shows just that.

Indian Forest Service (IFS) officer Praveen Angusamy shared a hilarious video earlier this week, where a monkey displayed its brilliance by escaping a potential attack from a tiger. The big cat was all calm and poise when it approached the prey but things didn’t pan out as planned.

The monkey managed to escape and the tiger was caught in a sticky situation. It was now wondering how to get down from the tree. First, it tried to cling to the branches – unsuccessfully. Seconds later, the big cat fell to the ground.

The video has been viewed by over 10,000 users on Twitter while over 1,300 people have liked it. Praveen wrote in the caption that people should not push their weaknesses, always know and play with their strengths.

Commenting on the tweet, one user commended the monkey’s clever survival tactics.

Some users said that this video is a lesson, which can be applied to real-life situations. They said it teaches humans to remain calm in the most difficult situations.

A wonderful lesson for humans too…Remain calm in difficult situation…Right Confidence with all faith in God is needed to win the game ???????? https://t.co/tAL6O3lnHp

What’s your take on it?