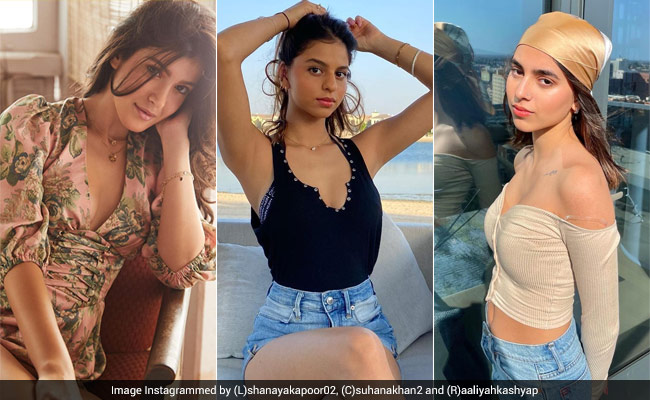 Latest: These Star Kids Are Making A Splash On Instagram

They may not have joined the family business yet, but that doesn’t mean these star kids are not celebrities in their own right. Today, the children of a number of Bollywood celebrities are making their presence felt on social media. We’re talking about the likes of Shanaya Kapoor and Suhana Khan, who have already established a strong fan base on social media. Instagram seems to be the favourite platform for star kids who have garnered tens of thousands of followers by sharing glimpses of their life.

Here is a look at seven star kids who are making a splash on Instagram:

Actor Sanjay Kapoor and Maheep’s daughter Shanaya Kapoor is all set to make her Bollywood debut in a film backed by Karan Johar – but she had been making waves on social media much before the announcement of her debut. Shanaya Kapoor has half a million followers on Instagram, where she regularly shares glamorous pics, dance videos and more.

Khushi Kapoor is the daughter of Boney Kapoor and the late Sridevi. Like her elder sister Janhvi, Khushi will soon be stepping into Bollywood too. Currently a student New York, her Instagram is a colourful mix of stunning vacation shots, family photos and pics with her other famous members of the Kapoor clan.

Anurag Kashya’s daughter Aaliyah Kashyap is currently studying in the US, but she has been Insta-famous since she was in school. Aaliyah Kashyap is known to be friends with Khushi Kapoor, and recently shared a pic with her and other friends after they met up in Los Angeles.

Although Shah Rukh Khan’s son doesn’t post too often on Instagram – his last post is dated September 2019 – he still has a following of 1.3 million on the photo and video sharing platform.

Ahaan Panday is the son of actor Chunky Panday’s brother Chikki and fitness expert Deanne. He is already a well known name on Instagram with nearly 2 lakh followers. Last year, it was reported that he would make his Bollywood debut in a superhero franchise backed by Yash Raj Films.

The granddaughter of Amitabh and Jaya Bachchan, Navya Naveli Nanda, has over 3 lakh followers on Instagram. Navya is the daughter of Shweta Bachchan and Nikhil Nanda, who is the grandson of late actor Raj Kapoor.