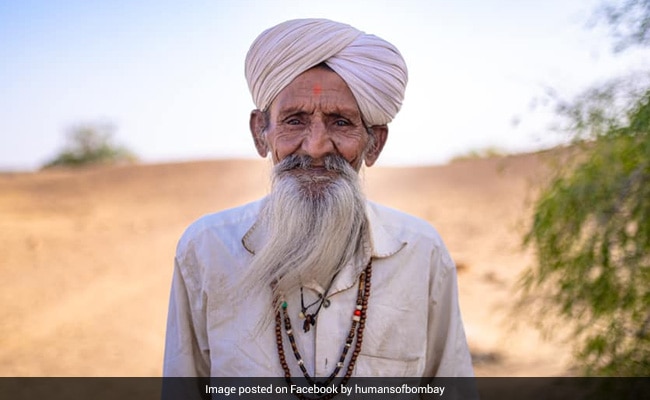 Latest: The Gatekeeper Of Kuldhara, 82, On His First Love

An 82-year-old man recounted the story of his first love.

The town of Kuldhara stands in the heart of the Thar desert in Rajasthan. Believed to be haunted, this abandoned town has an 82-year-old gatekeeper who recently spoke to Humans of Bombay about the story of his first love. “I was in my 30s when I first met Marina – she had come to Jaisalmer all the way from Australia,” the gatekeeper of Kuldhara said as he opened up about his touching love story.

This was in the 1970s, he said, at a time when he hadn’t yet become the gatekeeper of the abandoned town. He met Marina in Jaisalmer and during her five-day trip, he taught her how to ride a camel.

“For both of us, it was love at first sight. Throughout the trip, we couldn’t take our eyes off each other,” the gatekeeper recalled.

Before she left for Australia, Marina confessed her feelings and said “I love you” to the man who had fallen for her at first sight. Though the gatekeeper was left tongue-tied after hearing Marina’s confession, he says she understood his silence. The two continued to stay in touch after she flew back to Australia.

Later, when she invited him to Australia, the ecstatic man took a loan of Rs 30,000 and, without informing his family, flew to Melbourne, where he stayed for three months. These three months together he described as “magical”, but things got complicated when Marina asked him to get married and settle with her in Australia.

“She cried a lot the day I left, but I had to let her go,” the gatekeeper recounted.

Back home, he married under family pressure and took up a job as the gatekeeper of Kuldhara. “But quite often, I’d find myself thinking about Marina – ‘Would she have gotten married?’, ‘Will I ever see her again?’ but I never had the courage to write to her,” he said.

“As time passed, memories faded,” he said. His sons grew up and moved out, and two years ago, his wife died.

“And here I was, an 82 year old man, gatekeeping India’s haunted village.”

But just when he thought life couldn’t surprise him anymore, it did. A month ago, he received a letter from Marina. “After 50 years, she found me!” he says.

The gatekeeper of Kuldhara says that he and Marina have been calling each other every day and that she’s planning to visit India soon. “She told me that she’d never gotten married,” he says. “I don’t know what the future holds, but knowing that my first love is back in my life and talks to me everyday is a feeling I can’t explain.”

The Facebook post documenting the gatekeeper’s story has struck a chord with thousands of readers. It has racked up more than 18,000 reactions and 1,200 comments – many from people asking for a follow-up post.

“Tuning in from Australia. Please do a follow up on this story! I can understand not wanting to leave your incredibly rich culture and the home you love, Sir. Wishing you and Marina happiness in these golden years,” wrote one person in the comments section.

“What a beautiful story! I want to know what happens next … when Marina comes to India? Please keep us informed – we all need to hear about this love story!” another said.