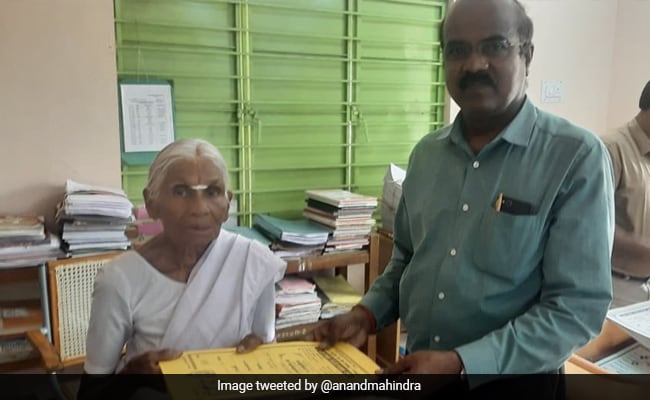 Kamalathal, a Coimbatore woman who cooks and sells idlis, will soon have her own workspace.

Anand Mahindra took to Twitter this morning to share some heartwarming news. The Chairman of Mahindra Group revealed that Tamil Nadu’s famous “Idli Amma” — who went viral two years ago for cooking and selling idlis for just rupee one each — will soon have a house to call her own.

Two years ago, industrialist Anand Mahindra had tweeted about Kamalathal, who soon came to be known by the affectionate moniker of “Idli Amma”, saying that he would like to ‘invest’ in her business. Kamalathal’s story went viral after it emerged that she serves idlis for the nominal cost of 1 rupee per idli, waking up before dawn to cook them along with sambhar and chutney. Mr Mahindra, in 2019, tweeted an offer to replace her wood-burning stove with an LPG connection.

The industrialist’s tweet brought viral attention to the grandmother and Bharat Gas Coimbatore gifted her an LPG connection.

“This is superb. Thank you Bharat Gas Coimbatore for giving this gift of health to Kamalathal.
As I have already stated, I am happy to support her continuing costs of using LPG,” Mr Mahindra tweeted at the time.

Now, he has shared an update on the story. This morning, Anand Mahindra tweeted that the Mahindra Group had understood from Kamalathal herself how best to ‘invest’ in her business. After realising that her priority was to have a house or workspace from where she could cook and sell idlis, the Mahindra Group set to work by helping register land in her name.

Mahindra Lifespaces, the real estate and infrastructure development arm of the Mahindra Group, will soon begin construction of her house.

“Grateful to the Registration Office at Thondamuthur for helping us achieve our 1st milestone by speedily registering the land,” tweeted Anand Mahindra.

He also thanked Bharat Gas Coimbatore for providing Kamalathal with a continued supply of LPG.

The Mahindra @life_spaces team will soon start the construction as per Kamalathal’s requirement. Once again thanks to BharatGas Coimbatore for providing her a continued supply of LPG. (3/3) pic.twitter.com/NO6YtWr9b5

The gesture was appreciated by thousands, earning praise on the microblogging platform.

@anandmahindra Sir, @mahendrarise, this is a great gesture of kindness. We, specially the customers at idli Amma outlet cannot thank you and team enough for this. Salute????

I’m sure that after all the support provided, the idli cost will remain unchanged for poor and labourers.

In 2019, Kamalathal had said that she kept the cost of her idlis very low, cutting into her own profit, so daily wage earners could afford to eat them too.