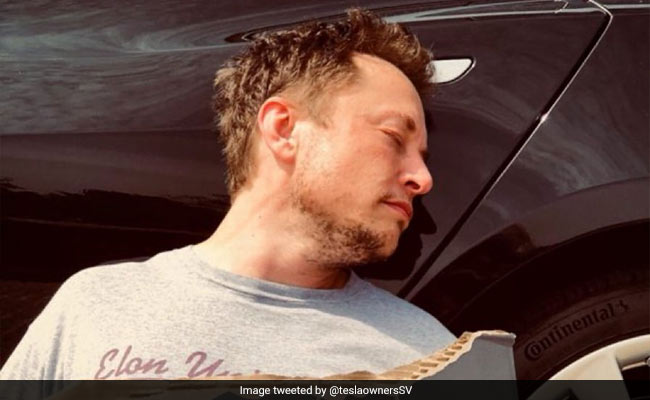 Latest: Elon Musk, Passed Out And “Bankwupt.” Pic Of The Decade? You Tell Us

Is this Elon Musk’s most iconic pic?

A photo of Tesla chief Elon Musk passed out against a Tesla Model 3, holding a sign declaring him “bankwupt”, has resurfaced on social media three years after it first went viral. A Twitter account called ‘Tesla Owners of Silicon Valley’ tweeted the 2018 pic this afternoon, receiving an amused response from the billionaire entrepreneur himself.

“The most iconic photo of the decade is @elonmusk being passed out on production heLL of the model 3 and bankwupt,” Tesla Owners of Silicon Valley wrote while sharing the pic.

The picture is actually part of an April Fool’s Day prank that Mr Musk played on his Twitter followers in 2018. In a series of increasingly-hilarious tweets, he announced that Tesla had gone bankrupt and that its CEO had been found “passed out against a Tesla Model 3… tracks of dried tears still visible on his cheeks.”

Elon was found passed out against a Tesla Model 3, surrounded by “Teslaquilla” bottles, the tracks of dried tears still visible on his cheeks.

This is not a forward-looking statement, because, obviously, what’s the point?

While Tesla was definitely having a tough time in 2018, that doesn’t seem to be the case anymore. The electric automaker’s meteoric rise briefly made its CEO Elon Musk the richest person in the world earlier this year.

Tesla is also building a new factory in Austin, Texas, where it plans to hire more than 10,000 people.

“Over 10,000 people are needed for Giga Texas just through 2022!” CEO Elon Musk tweeted on Wednesday, sharing a post by ‘Tesla Owners of Austin’ talking about the company’s hiring plans. People applying for certain jobs at Tesla may not require a college degree, the snapshot re-tweeted by Elon Musk revealed. For certain roles, people can apply right out of high school.

Giga Texas or Gigafactory Texas is an automotive manufacturing facility near Austin that is under construction by Tesla. According to the Tech Republic, Tesla is hoping to complete the construction of the $1.1 billion plant by the end of 2021.

In his tweet, Mr Musk revealed the factory is located five minutes from the airport, right on the Colorado river.

The tweet about Tesla’s hiring plans followed another announcement by Elon Musk. A day before, he tweeted that SpaceX would be hiring “several thousand” employees in the Brownsville/South Padre area of Texas.

“Please consider moving to Starbase or greater Brownsville/South Padre area in Texas & encourage friends to do so! SpaceX’s hiring needs for engineers, technicians, builders & essential support personnel of all kinds are growing rapidly,” he wrote, adding that Starbase would grow by several thousand people over the next year or two.

The number of jobs announced by Elon Musk for Tesla has far exceeded expectations. Yahoo News reports that the number is almost double of what the automaker had initially indicated.