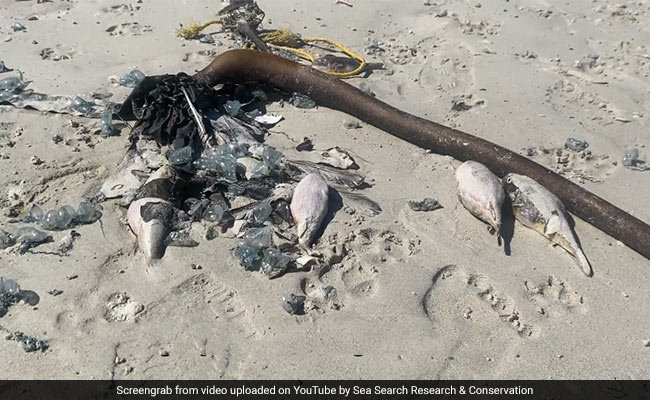 Latest: Hundreds Of Sea Creatures “Deadlier Than Cyanide” Found Washed Up On Beach

Hundreds of poisonous fish were seen washed up on a beach in South Africa.

The oceans are mysterious and we haven’t even scratched the surface when it comes to discovering all the wonderful and dangerous creatures in them. Recently, a British scientist in Cape Town, South Africa, got a sneak peek of sorts when she chanced upon hundreds of fish washed ashore on Muizenberg Beach. Dr Tess Gridley was walking with her family when she witnessed the mass stranding at the beach.

The species were soon identified as the poisonous “evil-eye” pufferfish by experts at South Africa’s Department of Environment, Forestry, and Fisheries. According to Daily Mail, the ministry said in a statement, “The fish mortalities in False Bay are exclusively of the evil-eye pufferfish with counts of 300 to 400 dead fish per km of shore.” The pufferfish is known to contain a neurotoxin more harmful than cyanide. The toxin can paralyse the diaphragm leading to respiratory failure.

Advising locals to stay away from the beach, the statement added, “These dead fish all carry the deadly neurotoxin Tetrodotoxin and should not be eaten; death comes usually by cardiac arrest.”

The department further warned beach dog walkers to keep their pets away from the deadly fish. A local NGO, AfriOceans Conservation Alliance, announced that one dog had already died due to consumption of the pufferfish, the report added.

Dr Tess Gridley, who studies marine life as part of the Sea Search organisation, shared the video of the stranding on the organisation’s YouTube channel. In the video, she said that she saw a pufferfish for every one metre she walked.

“The beach is 200 metres from our house and we were on a family walk,” Dr Gridley was quoted as saying by The Sun. “I can’t say how many were there as I only looked in a small area – I was with my kids and dog, and prepping for fieldwork so it was a short visit.

“But if you did count it would have exceeded hundreds.”

The reason behind the mass stranding of the pufferfish remains a mystery.