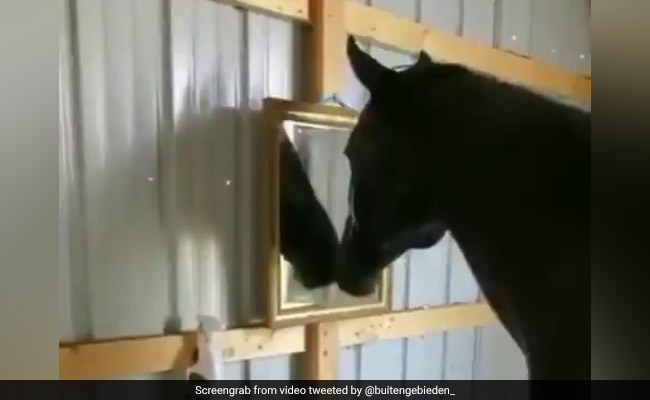 Latest: A Horse Discovers A Mirror. What Follows Is Hilarious. Watch

If you are looking for animal videos that can bring a smile to your face, this clip of a horse looking at itself in a mirror may do the trick for you. The video, shared on Twitter on Sunday, starts with a horse staring at a mirror. Then, the horse takes a step backwards and looks at its reflection from a distance. He made a few funny noises and then goes close to the mirror again, and for a few seconds, looks intensely at his reflection. The curious animal even touches its nose to the mirror. After repeating the action of moving back and forth and staring at its reflection from various angles a few times, the horse walks out of the enclosure.

The 49-second hilarious clip grabbed over 2,400 likes within 14 hours.

The reactions included Twitter users trying to deduce what the horse may be thinking or comparing the situation to something similar they may have encountered in real life.

One of the users compared the horse’s behaviour similar to understanding “quantum mechanics”.

Another user started to guess what may have been on the horse’s mind. He tweeted: “I turn away, and look right back & THERE HE IS!! I turn the other way & turn right back & he’s STILL there!”

Few of the other hilarious tweets included the horse wanting to “put on some mascara”, or asking the mirror, “Who’s the fairest of them all?”

Is it me? oh i should put on some mascara.

Mirror, mirror on the wall…
Who’s the fairest of them all?????

There were a couple of puns too. While one user said that the horse seemed to be in a “stable relationship”, another said that it looks like it is “Robert De Niro in an award-whinnying role”.

Seems to be in a stable relationship

“You talkin’ to me?” – Robert De Neigh-ro in an award-whinnying role

The Twitter account on which the clip was posted is run by a person called Sander from the Netherlands. The account has over 2.85 lakh followers and usually shares funny and adorable animal videos.

This heartfelt and entertaining clip will surely cure your Monday morning blues.