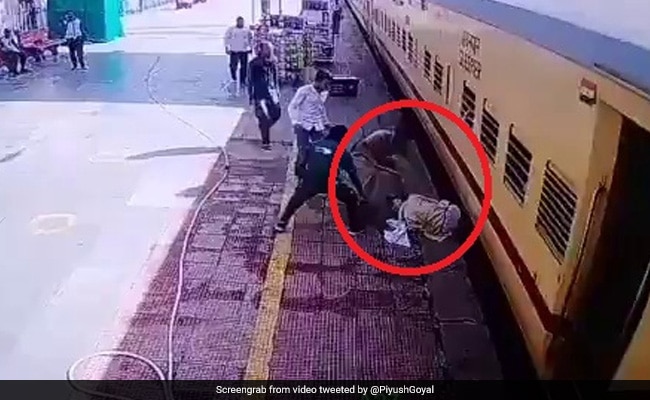 A cop rushed to save a man who slipped between the platform gap.

In the clip, the cop is seen walking on the platform next to a moving train, and then he suddenly starts running after spotting something amiss. A few seconds later, one can see the elderly man clinging to a window on the train, trying to ensure that he doesn’t come under the wheels. Unfortunately, he loses his grip and falls onto the platform, with a part of his body precariously caught in the gap between the platform and the train. Reacting quickly, the cop pulls him to safety.

The policeman’s quick and timely action didn’t go unnoticed. As soon as Mr Goyal put up the video of the heroic act, it went viral on Twitter. The clip has garnered almost 6,500 likes, and was retweeted 888 times till Monday afternoon.

Many sought awards and recognition for such acts to boost the morale of the entire force and inspire others.

Sir, Kindly organise a program and appreciate all such acts of Police and other officials by an award recognising their services. It will inspire others to emulate. Pls also organise training programs using such officers as resource personnel.

I think @RailMinIndia should appreciate this kind of officer with some goods or award which will help promote positive behavior in police department and every railway station will be more secure.

Last year in September, the government’s policy thinktank NITI Aayog had asked the Indian Railways to install automatic doors on all suburban trains, including in Mumbai’s perennially crowded local trains. The idea was to check accidents that occur due to overcrowding as doors are usually open.