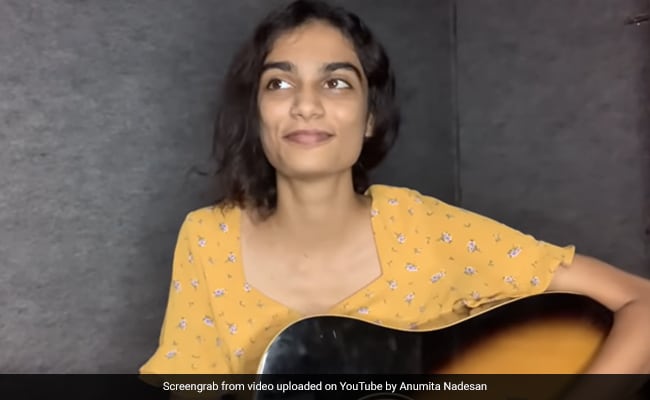 Latest: The Internet Is In Love With Anumita Nadesan’s ‘Jashn-E-Bahaaraa’ Cover. Heard It Yet?

Anumita Nadesan’s cover of Jashn-E-Bahaaraa is a viral hit.

Going by the more than 5,000 comments it has garnered on YouTube, people can’t stop listening to this song. We’re talking about Anumita Nadesan’s cover of Jashn-E-Bahaaraa from the movie Jodhaa Akbar. Ms Nadesan’s cover of the song recently crossed more than 2 million views on the video-sharing platform where it was posted on February 27.

“Hellloooo! The full version of Jashn-E-Bahara is finally here! I hope you enjoy it,” YouTuber Anumita Nadesan wrote while sharing the video. She had first shared a sneak-peek of her cover in an Instagram Reels video last year.

Listen to the Jashn-E-Bahaaraa cover below:

In the month since it was posted, the video has grown steadily in popularity, racking up views and comments praising the singer.

“I listen to this song 100 times a day. Beautiful voice,” wrote one person on YouTube.

“No autotune, no professional setup, just a guitar and a mind-blowing voice!” another said.

On Twitter, users heaped praises on the Jashn-E-Bahaaraa cover.

Did not realize Jashn – e – Bahara could actually become such an unplugged experience! Beautifully rendered here by Anumita Nadesan.
(Quickly checks if my younger sibling is anywhere remotely around as I type this ????.)https://t.co/FjoF1xmFi3

Anumita Nadesan has finally released her viral Jashn-E-Bahara reel’s full version on YouTube!!! Please do yourself a favor and listen to this gem right away. <3 <3 <3https://t.co/66K453D1YS

It was in December last year that Ms Nadesan had shared a Reel which showed her singing the song from the 2008 film Jodhaa Akbar. The song had gone viral on Instagram, clocking up more than 5 million views.

On Sunday, the singer took to Instagram once again to thank her listeners for their love and support. “We’ve crossed 2 million views! Thank you everyone for the love and support. More music coming your way,” she wrote.