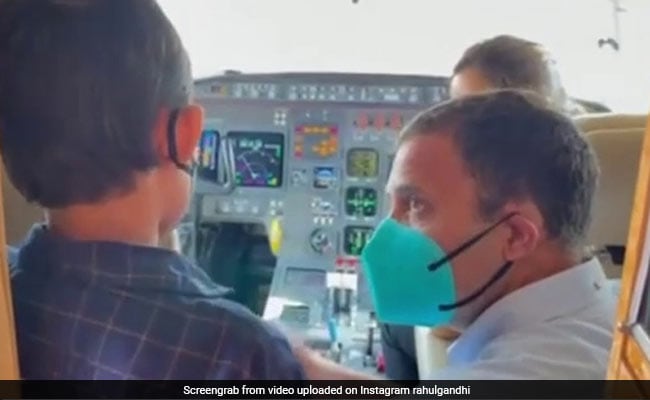 Latest: Kerala Boy, 9, Gets A Glimpse Of The Cockpit, Courtesy Rahul Gandhi

A nine-year-old from Kerala who dreams of becoming a pilot got a taste of the cockpit life, thanks to Congress leader Rahul Gandhi. In a video that he shared on Instagram, Mr Gandhi can be seen inviting Advait Sumesh to visit a helicopter and taking him through the workings of the chopper’s control panel.

It all began on Saturday when the Wayanad MP met nine-year-old Advait at a tea shop in Kannur district while campaigning in poll-bound Kerala. Reportedly impressed by the boy’s proficiency in English and Hindi, Mr Gandhi asked him what he wanted to be when he grew up.

I want to be a pilot, the boy said. He added that he had never seen a helicopter from close quarters before.

Rahul Gandhi then invited Advait to visit his helicopter. The next day, he was shown around the cockpit by Mr Gandhi and a woman pilot at Calicut International Airport.

“We’ve taken the first step to make Advait’s dream come true,” reads the caption alongside the video shared on Rahul Gandhi’s Instagram. “Now it is our duty to create a society and a structure that will give him every opportunity to fly.”

The video has been viewed more than 1.6 lakh times since being posted on Instagram yesterday.

“Empathy goes a long way to win hearts,” wrote one person in the comments section. “Very touching,” another remarked.

On Sunday, the last day of campaign for the April 6 Assembly poll, Rahul Gandhi took an autorickshaw ride at two places in Kerala to highlight the rising fuel prices under the BJP-NDA rule.