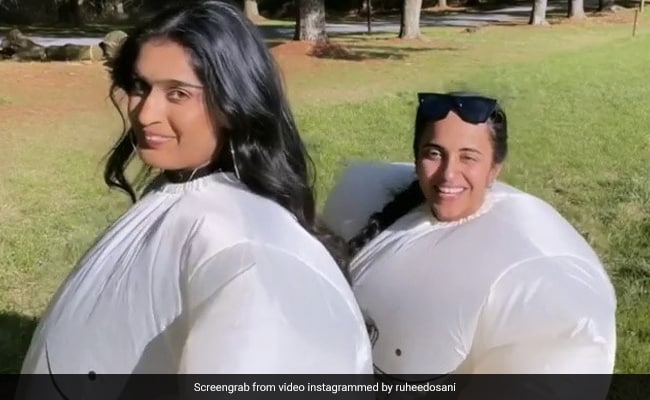 Latest: Desi Influencers In US Groove To ‘UP Bihar Lootne’ In This ROFL Video

This dance routine is going viral on Instagram. Seen it yet?

What happens when two hugely popular desi content creators team up? A Internet-breaking dance video is what happens. Recently, two influencers from India, who are currently in the United States, met up and treated fans to a dance performance that is going viral on Instagram.

Niharika NM and Ruhee Dosani’s dance routine on the song ‘Main Aai Hoon UP Bihar Lootne‘ has crossed more than 2.7 million views on the photo and video sharing platform since being posted three days ago.

While Niharika NM is known for her hilarious and relatable Instagram video which have helped her gain a following of 1.6 million on Instagram, Ruhee Dosani has been entertaining her followers with funny dance videos, many of which feature her friends and family. Her videos garner millions of views each on Instagram.

This dance video features Niharika and Ruhee dancing to the hit Shilpa Shetty song while wearing inflatable sumo wrestler costumes. The dance steps, their expressions and their costumes come together to make for a hilarious watch. Take a look:

Since being posted on Saturday by Ruhee Dosani, the video has racked up a whopping 2.7 million views, along with thousands of amused comments.

“What energy,” wrote music composer Yashraj Mukhate, who has had his own brush with viral Internet fame more than once.

“OMG thank you for this. Just the laugh I needed,” another Instagram user remarked.

What do you think of this dance performance? Let us know using the comments section.