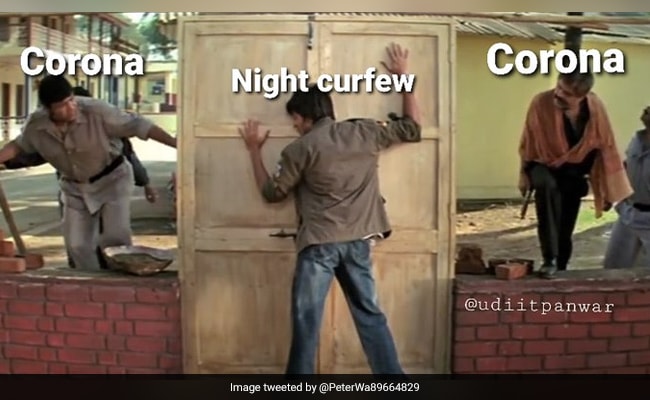 Memes started pouring in on social media after the Delhi government announced a night curfew in the city from 10 pm to 5 am amid rising Covid cases.The order for night curfew will continue till April 30, said a government official. The decision has been taken in view of rising COVID-19 cases in Delhi, he added. During night curfew hours, traffic movement would not be stopped and those going for vaccinations will be allowed with an e-pass, officials said.

For meme-makers on Twitter, the announcement became an opportunity to flood the microblogging platform with jokes, memes and funny posts. It also set #NightCurfew trending high on Twitter.

Take a look at some of the memes that the Delhi night curfew has inspired:

Curfew in Delhi from 10PM-05AM

Mumbai also entered a partial lockdown in the evenings from Monday. The financial capital will witness a curfew from 8 pm to 7 am on weekdays and ‘strict lockdown’ during the weekends amid a surge in COVID-19 cases

Mumbai and Delhi, once bars and nightclubs reopen when the night curfew is lifted. pic.twitter.com/pUsQYCyj7m

In Delhi, private doctors, nurses and other medical staff will be allowed movement with ID cards. Exceptions will also be made for pregnant women and people needing treatment. Those in essential services and retailers who need to travel after hours for ration, grocery stocks, vegetables, milk and medicines will also be allowed.

On Monday, the number of cases in 24 hours crossed one lakh for the first time in India.