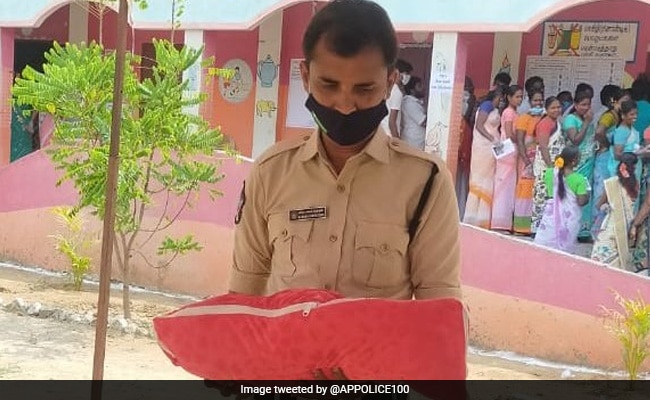 A picture of an on-duty constable comforting a crying baby as its mother voted at a polling booth in the Tamil Nadu elections has gone viral on social media. Andhra Pradesh Police revealed in a tweet that the constable, deployed from Anantapur district, was clicked with a one-month-old baby in his arms. As the infant’s mother went to cast her vote, the constable took charge of carrying the crying baby until she returned. “AP Police’s humane face at #TamilNaduElections: Anantapur Police constable deployed for Tamil Nadu Elections 2021 carried and lulled a one-month-old crying baby until the mother’s return from the voting booth, winning the hearts of many,” the tweet read.

The constable, whose name has not been revealed, received salutes from social media users. In addition to hundreds of likes and reshares, the post has got many reactions from people on the micro-blogging site. A user said, “OMG!! So nice of him! Good job, AP Police!”

OMG!! So nice of him! Good job AP POLICE!

While other comments read, “Salute sir” and “Hats off”

Voting across 234 Assembly constituencies in 38 districts of Tamil Nadu was held on April 6. The state witnessed 62.86% voting till 5 pm. Around 3,998 candidates are in the fray in the state polls. The results will be declared on May 2.