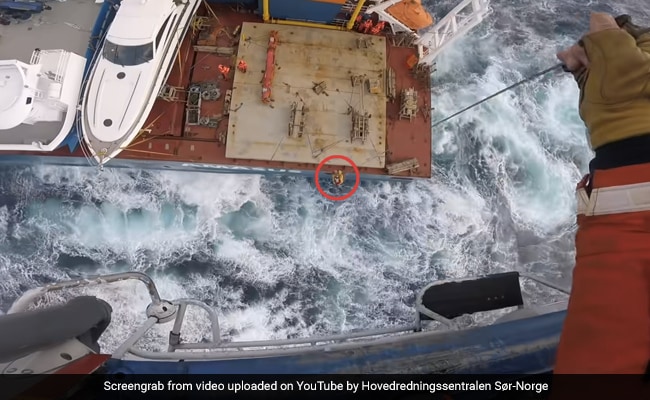 A Dutch cargo ship was adrift in the Norwegian Sea on Tuesday after all of its crew members were airlifted, with some having to jump into the rough waters to be rescued.

The “Eemslift Hendrika”, which was carrying several smaller ships from Bremerhaven in Germany to Kolvereid in Norway, made a distress call Monday, reporting a heavy list after stormy weather displaced some of its cargo.

The 12 crew members were evacuated in two stages later the same day by Norwegian rescue services.

The first eight were airlifted by helicopter from the deck of the cargo ship.

But the last four had to jump into the water to be plucked out of the sea because the waves were rocking the boat and the list was too severe.

Footage from the Norwegian authorities shows a man in an orange survival suit throwing himself into the rough sea off the stern of the ship.

The ship also suffered an engine failure and then began drifting towards to the Norwegian coastline.

On Tuesday morning it was about 130 kilometres (80 miles) northwest of the port city of Alesund.

One of the boats it was carrying on deck fell into the sea, potentially helping to reduce its list, which is now estimated to be around 30 degrees after hovering between 40 and 50 degrees.

“The situation seems to be more stable but there is still a risk that it could capsize,” Hans-Petter Mortensholm with the Norwegian Coastal Administration (Kystverket), told AFP.

“We want to put someone on board to arrange for a tow as soon as the weather conditions allow,” he added.

A Norwegian Coast Guard vessel arrived at the ship on Tuesday.

The operator of the vessel has also called in the Dutch company Smit Salvage, which was involved in the refloating of the Ever Given in Egypt’s Suez Canal last week.