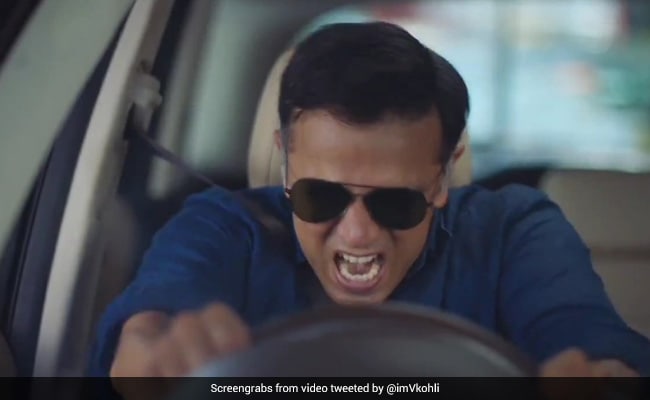 Does Rahul Dravid have anger issues? Find out in the video below

Rahul Dravid, the former mainstay of the Indian middle-order, is known as a mild-mannered person, both on and off the field. But Indian cricket team captain Virat Kohli got to witness another side of Dravid recently – and shared it for the world to see. Rahul Dravid is seen in an all-new avatar for an advertisement of a credit card bill payment app. The commercial shows an exasperated Dravid stuck in a traffic jam. We see him picking fights, banging up the side view mirrors of other vehicles with a bat and getting annoyed with people around him. At one point, Dravid gets angry and he comes out of the sunroof window to yell, “Indiranagar ka gunda hoon main (I am the don of Indiranagar)”. Indiranagar is a locality in Bengaluru and Dravid spent most of his life in his family home there.

“Never seen this side of Rahul bhai,” wrote Virat Kohli while sharing the video.

Never seen this side of Rahul bhai 🤯🤣 pic.twitter.com/4W93p0Gk7m

As soon as the ad made its way to the Internet, people couldn’t resist reacting to the never-seen-before side of the 48-year-old legend. Some loved the bit where Dravid said, “Indiranagar ka gunda.” A Twitter user wrote, “I never thought I would say this but angry Dravid is the cutest.

Another person felt grateful for ‘whoever came up with the idea of “Angry Dravid.”

Thank you to whoever came up with the idea of “Angry Dravid”. pic.twitter.com/o6zXD9CrI1

Former India cricketer Dodda Ganesh, who played for Karnataka in domestic tournaments, claimed that he had seen Dravid get angry before. “The last time Rahul Dravid shouted like this was, from the Karnataka dressing room, and I was at the receiving end,” his tweet read.

The last time Rahul Dravid shouted like this was, from the Karnataka dressing room, and I was at the receiving end. “Innu ondu Run ide kano”. @imVkohlihttps://t.co/8QE1roe926

Others could not believe that the commercial actually chose Dravid of all the people.

Bhai this is so refreshing n hilarious 😂😂

Rahul Dravid is one of India’s most successful batsmen. In 2012, he retired from the game after 16 glorious years. He was always known as the gentleman in the gentlemen’s game.