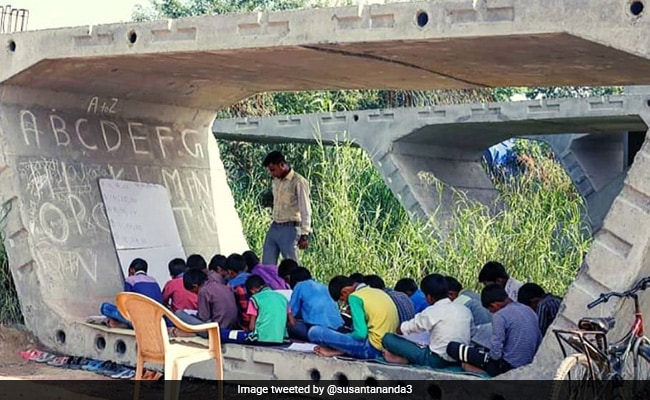 Satyendra Pal takes classes under a flyover in Delhi

Indian Forest Service officer Susanta Nanda borrowed the words of renowned Hindi poet Dushyant Kumar to praise a teacher who has been taking classes for children in a Delhi slum. Beneath a partially built flyover in eastern Delhi, Satyendra Pal uses a whiteboard to teach children with no access to online learning. A mathematics graduate who hails from a village in Uttar Pradesh, Mr Pal began taking classes in 2015. His initiative received much praise and appreciation during the coronavirus-induced lockdown when schools shut down across the country.

“I stopped the classes in March because it was too dangerous, but parents requested me to teach again,” he was quoted as saying by news agency Reuters at the time. “I want to earn money, but if I focus on myself I will earn alone. If I help these kids, they will all earn with me.”

Mr Pal’s initiative to help underprivileged children found an admirer in Mr Nanda. “Ho kahin bhi aag, lekin aag jalni chahiye,” he wrote while sharing a picture of the teacher in his open-air ‘classroom’. The quote, taken from a motivational poem by Dushyant Kumar, roughly translates to, “It doesn’t matter where it burns, but keep this fire burning.”

The poet’s words have been used on Twitter time and again to hail instances of courage and determination against all odds. IAS officer Awanish Sharan used them to praise an ATM guard studying next to the machine.

He had also used the quote while sharing a picture of a young boy studying at a tea stall.

Activist Yogita Bhayana also used “Ho kahin bhi aag…” to caption a picture of a child studying on a footpath, only a few steps away from his vegetable cart.

Satyendra Pal is not the only teacher who has gone above and beyond to help students in difficult times. Last year, a Delhi Police constable also earned praise for teaching children who could not afford mobile phones for online classes.

Speaking to ANI, Constable Than Singh said, “I have been running this school for a long time but during the start of the pandemic I closed it for children’s safety. But, when I saw many students were not able to take online classes, I decided to restart my school because they don’t have things like phone and computers,” he said.