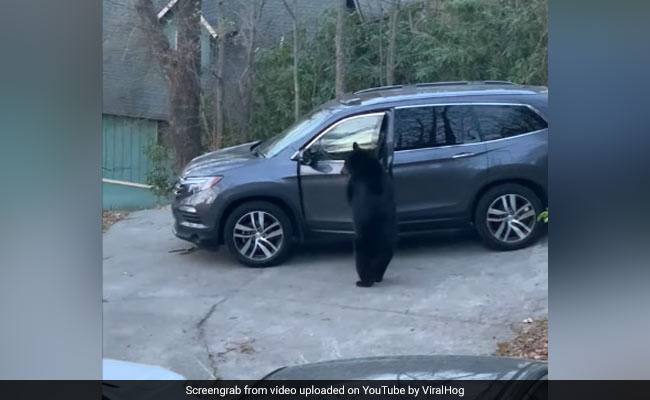 A bear opens a car and climbs inside to steal food in this video.

It is not unusual to spot black bears in the mountain town of Gatlinburg. Located in eastern Tennessee, USA, Gatlinburg is the gateway to the Great Smoky Mountains National Park, which is home to hundreds of black bears. But even though bear sightings in the area are not uncommon, to see a black bear standing upright, opening a car door and stealing candy from the vehicle makes for quite a sight.

This is exactly what a group of guys having a bachelor party at a cabin in Gatlinburg witnessed recently.

Footage of the incident shows the bear standing on two legs to deftly open an unlocked car door. Once that is done, it drops down on all fours and climbs inside the vehicle, only emerging a few seconds later with a packet of food in its mouth.

“He’s getting in the car.. this is unbelievable,” one person can be heard saying in the video while others laugh incredulously at the scene unfolding in front of their eyes.

The bear soon loses interest in the snack it stole – a packet of peanuts – and drops it on the ground before moving away.

Black bears often stray out of the wilderness to hunt for food in Gatlinburg. “Gatlinburg is its own unique situation. There are so many people in Gatlinburg and everyone who lives around here knows there’s issues with bears being food conditioned and habituated to people,” said wildlife officer Dan Gibbs to WVLT.

In 2019, pics of a mama bear and her three cubs playing inside a car in Gatlinburg had gone viral on social media.