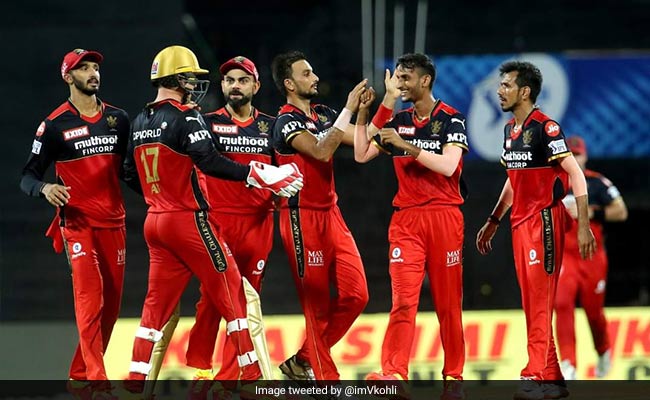 Virat Kohli-led Royal Challengers Bangalore (RCB) defeated SunRisers Hyderabad (SRH) by six runs in a thrilling encounter at the MA Chidambaram Stadium in Chennai on Wednesday. With this win, RCB climbed to the top of the IPL 2021 Points Table, winning their first two games. For longtime fans of IPL, this was a rare occurrence indeed, as Royal Challengers Bangalore have rarely be seen at the top of the points table. RCB have four points from two matches, and are followed by Delhi Capitals (DC) in second position, who have two points from one match.

On Twitter, RCB fans celebrated the development with memes and jokes. Take a look:

Who is at the top of points of table?#SRHvRCB
No one:
Le RCB: pic.twitter.com/6iqCHbVMVD

#SRHvRCB
RCB is on first position in point table

#RCB moves to the top of the points table after 2 wins.#SRHvRCB#IPL2021pic.twitter.com/ecLqUUr9yb

My mom asked me “where’s the TV remote?”

She replied, “what are you talking about?!”

Many congratulated Virat Kohli and his team

Virat Kohli’s Army done it. What a Bowling Performance and What a Phenomenal Comeback by RCB. Just just Amazing. Incredible Win by RCB. pic.twitter.com/bGuMBzYypp

Virat and Anushka after seeing RCB at the top of points table #IPL2021#RCBpic.twitter.com/yBHnafHybL

At the third position on the IPL points table are defending champions Mumbai Indians, who won and lost a game each. Punjab Kings (PBKS) also have the same number of points as Mumbai Indians, but their inferior Net Run Rate (NRR) has pushed them to fourth position, with two points from one game.

According to news agency ANI, Royal Challengers Bangalore skipper Virat Kohli was reprimanded for breaching the Indian Premier League’s (IPL) Code of Conduct during his team’s match against Sunrisers Hyderabad (SRH) on Wednesday. Kohli scored 33 runs and was bagged by Jason Holder in the 13th over of the innings. Vijay Shankar caught him in the outfield. Kohli, while leaving the ground, was seen hitting the boundary cushion with his bat as well as a chair placed by the dugout following his dismissal.