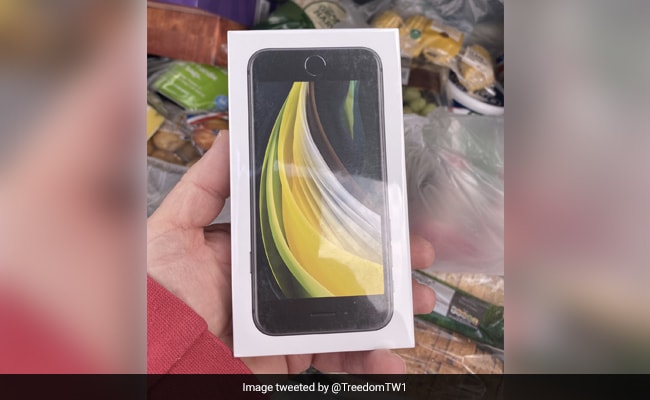 Nick James received an Apple iPhone with his grocery order from Tesco.

Most of us spend months saving up to buy our favourite phone but all that one man in Britain had to do was buy his groceries. Sounds impossible, doesn’t it? Well, Nick James from Twickenham was just as stunned when he saw a brand new Apple iPhone in his grocery bag. He had just ordered some items from one of the branches of Tesco, UK’s multinational groceries and general merchandise retailer. The 50-year-old was asked to look for a surprise in the bag by the supermarket’s staff. Not thinking much of it, Mr James was expecting an Easter egg or something along those lines. But he was soon ‘shocked’ to discover the iPhone SE in place of the apples that he had ordered.

According to The Mirror, Mr James said, “I was half expecting the surprise to be an Easter egg or something – I was a little bit shocked, to say the least.”

The gift to Mr James was a part of the retailer’s week-long “super substitutes” promotion in which Tesco Mobile is giving away free iPhones, AirPods and Samsung devices.

Along with the iPhone, he received a note that read, “Order some apples? You might find an Apple iPhone SE in there! Have some laundry tablets in your load? There could be a brand new Samsung Galaxy Tab A7 or that gnocchi you were going to rustle up could be a Nokia…”

A big thanks this week to @Tesco & @tescomobile. On Wednesday evening we went to pick up our click and collect order and had a little surprise in there – an Apple iPhone SE. Apparently we ordered apples and randomly got an apple iphone! Made my sons week! ???? #tesco#substitutepic.twitter.com/Mo8rZoAUwD

As the incident grabbed eyeballs, the company explained in a statement, “From today until April 18, Tesco Mobile is raiding the nation’s shopping bags to make unbelievable substitutes in lucky Tesco.com click+collect orders.” It added, “Tesco Mobile’s ‘Super Subs’ has been created to show how amazing things can happen when the worlds of supermarket and mobile come together – all while putting a smile on shopper’s faces.”

The Tesco giveaway chooses shoppers at random to receive a top tech item in their grocery bag, the Mirror report said. As many as 80 items will be given away as gifts by the retailer at a handful of stores.

Reacting to the lucky win, a Twitter user said, “A really clever – and generous – marketing ploy by Tesco Mobile…I’ve got my fingers crossed that the wallpaper stripper I’ve ordered is substituted.”

A really clever – and generous – marketing ploy by @tescomobile …. I’ve got my fingers crossed that the wallpaper stripper I’ve ordered is substituted 😉

Another user asked, “Why didn’t you sell in India.?

Why didn’t you sell in india

There were a few who were curious to know what happened to the apples Mr James had ordered.

Did you get your apples?