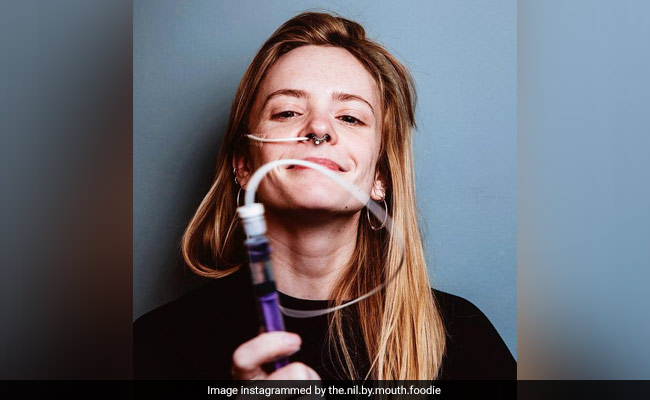 Latest: Why This Chef Can Never Eat Food Again

Roast potatoes were the last thing that Loretta Harmes ate. That was six years ago. The chef will likely never eat solid food again. Loretta Harmes, from the UK, is battling Ehlers-Danlos Syndrome (hEDS), a genetic illness that affects connective tissues and manifests itself in different ways. In Ms Harmes’s case, tests done after years of misdiagnosis revealed that the illness left her stomach partially paralysed, unable to empty itself properly.

But she doesn’t let the disorder stand in the way of her passion – cooking.

Though she can no longer taste her recipes, Ms Harmes continues to cook and shares her creations on Instagram, where she has a steadily-increasing number of followers.

Loretta Harmes spoke to BBC about her condition and her journey. “Still can’t believe my story has been finally shared with world and the response has been mind blowing!” she said in an Instagram post this morning, after the story was published.

To BBC, Ms Harmes revealed that she used to feel excruciating pain in her stomach after eating. In 2015, when she was surviving on a diet of liquid meals, Ms Harmes was asked to eat solid food by a bowel consultant.

Tests done at St Mark’s Hospital in London led to a diagnosis of hypermobile Ehlers-Danlos Syndrome (hEDS). Ehlers-Danlos syndromes are a group of 13 disorders. In Ms Harmes’s case, it had damaged the connective tissue in the wall of her intestines.

For the 23-year-old, the diagnosis came after years of being disbelieved and incorrectly diagnosed.

Loretta Harmes had battled anorexia at the age of 15, but that lasted less than a year. Although she complained of digestive issues throughout her teens, she still managed to eat. However, things began to go downhill when she went to college at 19.

“Things went downhill dramatically – I couldn’t eat or go to the toilet at all, and then the next five years became a nightmare I couldn’t wake up from,” says Ms Harmes.

Her “nightmare” began with a doctor who was convinced that Ms Harmes’s weight loss was caused by a return of anorexia. At one point, she weighed less than 25 kgs.

Ms Harmes was placed in an eating disorder unit and sectioned under the Mental Health Act three times, for a total of 18 months to stop her leaving.

Life in the units was miserable for her. Patients would have to eat six meals a day, and all meals would have to be finished within a set time frame. Ms Harmes, for whom eating meant pain to deal with afterwards, would be left staring at her plate long after everyone else had finished. Nobody else was allowed to leave the table until she had finished her food, and Ms Harmes says that staff and other patients often bullied her to hurry up.

After every meal, patients were watched closely in a communal living room to make sure they did not try to get rid of the food they had eaten. Ms Harmes would curl up on a chair, trying to alleviate her pain.

“I fully recovered from anorexia, it was a life lesson which became a life sentence,” she says.

It was years later, with a last meal of roast potatoes, that her condition would be diagnosed correctly for the first time.

Today, Loretta Harmes is fed by total parenteral nutrition (TPN). In an Instagram post, she revealed that she has to feed for 18 hours a day. “It [fluids] bypasses my digestive system and goes through my bloodstream,” she writes.

A Hickman line goes through her chest and into a large heart vein. As things stand, Ms Harmes may never eat solid food or drink water again.

TPN has its own drawbacks, including the fact that the smallest speck of dust can contaminate the line, which can lead to sepsis. But despite its limitations, and the fact that she has battled several bouts of sepsis, Ms Harmes is grateful for the TPN.

“TPN restored my weight and gave me energy. It was nice to wear normal clothes again and not have to shop in the children’s section,” she says.

“The reason I don’t go stir-crazy over not being able to eat is because I’m so relieved to be free from the pain after so many years,” Ms Harmes adds.