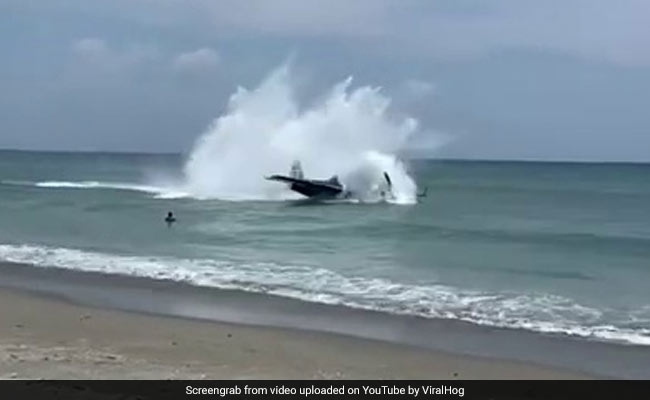 A viral video shows a plane making an emergency landing

A World War II aircraft, which was taking part in the Cocoa Beach Air Show, crash-landed in the ocean in Florida on Saturday. In a video, shared on YouTube, we can see the plane descending into the shallow water, making a “soft” landing. No one was injured in the incident. The single-engine TBM Avenger slowed down as it approached the shore and its single propeller comes to a halt. People on the social media platform have praised the pilot for a “decent emergency landing.”

One person said, “I don’t know anything about flying planes but that landing was awesome…Executed perfectly and safely done! Well done to that pilot.”

Another was curious to know some details about the aircraft. “Darn! That’s bad luck that will make for a bad day! It was a vintage warplane too. What kind of plane was it?” he wrote.

According to a statement by Cocoa Beach Air Show officials, the plane, while performing in the warbird parade, had a mechanical issue, reports Florida Today.

“The pilot was able to bring the plane down close to the shore. Rescue personnel were immediately on the scene and the pilot is OK,” the statement said.

The 1945 TBM Avenger, a torpedo bomber, was used by the US Navy during World War II. The Cocoa Beach Air Show website said the aircraft had undergone thorough restorations before it could take part in Friday’s airshow.

Following its retirement from the US Navy, it was used as a US Forestry Service fire bomber from 1956 to 1964 in Davis, California. The report added that the aircraft from the 1940s was restored over 18 long years by the Titusville-based Valiant Air Command, returning the vintage torpedo bomber to flight in January 2020.

In a Facebook post, the Valiant Air Command said that while it was good news that the pilot was fine, the not so good news was that it may once again take several years to rebuild the aircraft.

A report in CNN stated that rescuers were trying to figure ways to get the vintage plane out of the water.

The Federal Aviation Administration (FAA) is investigating the matter. The agency will, “release the tail number of the aircraft after investigators verify it at the accident site.”