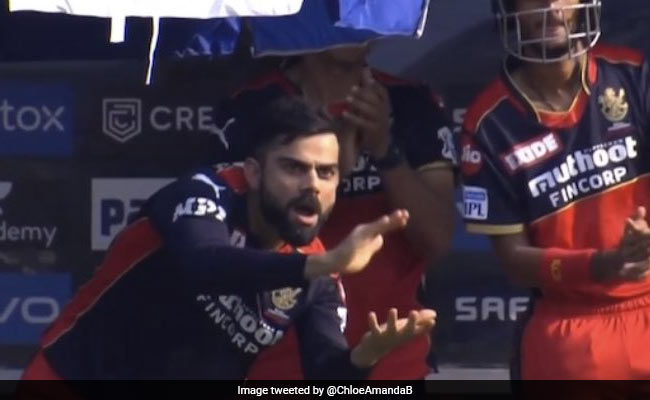 RCB vs KKR: Virat Kohli’s pic is now a meme on Twitter.

Royal Challengers Bangalore (RCB) registered an emphatic 38-run win over Kolkata Knight Riders (KKR) on Sunday in the Indian Premier League (IPL). Glenn Maxwell and AB de Villiers’ knocks of 78 and 76 were backed up by a spirited bowling performance as RCB defeated KKR by 38 runs at the MA Chidambaram Stadium. Batting first, AB de Villiers’ master class and Maxwell’s counter-attacking half-century propelled RCB to an imposing 204 for four. Now, a picture of RCB skipper Virat Kohli celebrating Maxwell’s fifty has been turned into a hilarious meme by Twitter users.

Take a look at some of the memes it has inspired:

My dad seeing me wake up before 12PM on a Sunday. pic.twitter.com/AlM0Tsk9Hf

Neighbour aunty whenever my parents scold me #RCB#RCBvsSRHpic.twitter.com/Ifr9bV02b7

#RCBvKKR
RCB Fans to Everyone after Wining the match : pic.twitter.com/bkoEhTA48J

Virat Kohli’s pic wasn’t the only meme from RCB vs KKR that had IPL fans amused. Here is a look at some others:

Directions in which AB de Villiers can hit a ball : #RCBvKKRpic.twitter.com/uqWsOFceCP

Virat Kohli lavished praise on Glenn Maxwell after the batsman’s knock played an important role in the team’s win.

“Well, I said at the halfway mark we have 200 because of two genius innings back-to-back. Maxwell was outstanding and AB to follow. When he gets in with that kind of form and flow, it’s impossible to stop him,” Kohli told host broadcaster Star Sports at the post-match presentation.

“We got 40 extra runs on that pitch which slowed down. Maxi has taken to this team like duck to water. AB loves the team and they were the difference today. There are areas we can work on. We’re not getting ahead of ourselves and not getting over-excited,” he added.