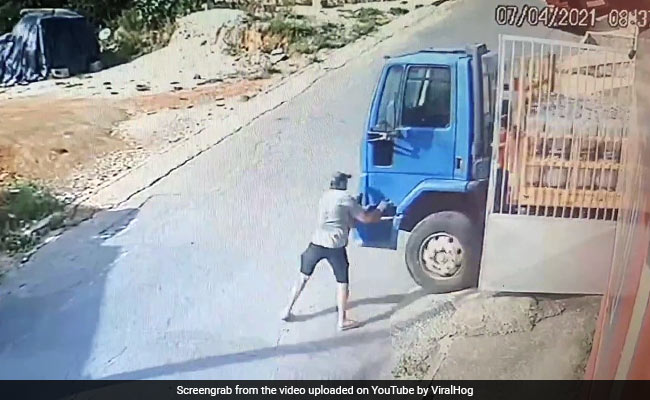 Latest: Truck Starts Rolling Away Without Driver. Then…

The driver was filmed running after the truck.

A heart-stopping video has captured the moment a truck started rolling away while its driver was standing outside, sending the man running in a bid to stop the vehicle from plunging off a cliff. The incident, which took place in Brazil, was captured on camera.

It all started when the driver started the truck and left it in neutral after loading it. Inexplicably, the cargo vehicle engaged first gear and started off towards the street. The video shows it hitting the driver on its way out. Thankfully, the driver managed to step away from the barreling truck and immediately rushed after the vehicle to stop it.

Pressed between the truck door and the wall, he risked his life in an attempt to stop the truck from rolling away further. Footage then cuts to show the scene on the road, where the truck was filmed rolling forward even as the driver chased it. He managed to climb inside the truck as it barreled towards a cliff, stopping it in the nick of time.

The incident occurred on April 7 in Ibirite, Minas Gerais, Brazil.

In the comments section on YouTube, many praised the driver for his courage.

“This man did well,” wrote one person. “Good save, driver,” said another.

This is not the first time that a video of an out-of-control truck has captured social media’s attention. In 2019, an out of control truck crashed on an icy road, narrowly missing a woman and two troopers in Illinois, USA.