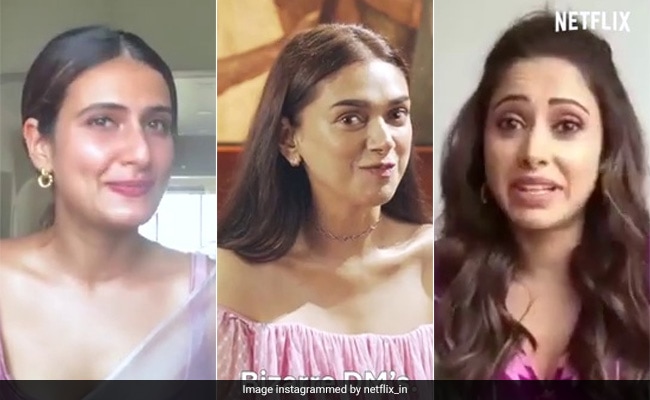 ‘Ajeeb Daastaans’ actresses share the strangest messages they have received.

In this age of social media, “sliding into DMs” is something we all have either done or experienced. And while there is nothing wrong with this, sometimes you may have faced or even heard your friends complaining about the unwanted messages dropped by strangers in the Direct Message feature of social media platforms. Recently, the cast of Netflix anthology, AjeebDaastaans, shared with viewers the weird messages they have received on social media. Actresses Aditi Rao Hydari, Fatima Sana Shaikh and Nushrratt Bharuccha read aloud these messages and even responded to them hilariously. The trio dealt with the trolling sportingly and left their fans impressed.

The video garnered over 1 lakh views in just an hour. The caption on Netflix India’s official Instagram account read, “Aditi Rao Hydari, Fatima Sana Shaikh and Nushrratt Bharuccha read out their DMs to show ‘lukin nyc deer’ is not the strangest one out there.”

In the clip, Fatima is seen reacting to cheesy compliments. The Ludo actress also denied a fan’s request to have her mimic her act from the film Chachi 420. She had worked in the film as a child artist. She also gave a fitting reply to someone who taunted her dressing style.
Aditi, meanwhile, agreed to some of the funny accusations made by the fans. Nushrratt Bharuccha was in no mood to take negativity from social media users. She even joked that she would slap a person who demanded to get vaccinated only by her.

Many could relate to these DMs as one of them wrote, “Faced a lot more ajeeb DMs than they have.” A viewer who thoroughly enjoyed the video commented, “This was so fun to watch.” One more comment read, “This was just so great.”

Earlier, a behind-the-scenes video was shared where the cast and crew of the project were seen goofing around. The caption read, “Some serious things went down while making a movie like #AjeebDaastaans. Very serious.”